I launched onto Cape Cod’s Brewster Flats at sunrise, two hours before low tide. It was one of those glorious mornings when birds and fish were all around and catching was easy. Approximately a mile offshore in my Hobie pedal kayak, the water was only seven feet deep.

When the fish were not churning up the ocean at the surface, I could see them racing around below, lining up the next sand eel massacre. Just about all the fish at the surface were in the 15- to 26-inch range, and their youthful aggression toward my topwater soft bait made me feel like I should be seeking sponsors.

I occasionally saw a larger fish cruising along the bottom, but smaller fish dominated the scene. Like bluefish in midsummer, the frenetic schoolies were creating a net over the bigger fish below, not allowing me to get my bait to them. In deeper water, I typically switch over to a tube-and-worm presentation with leadcore line after catching a few of the topwater teens.

The strategy is to circle near but still outside the school while attempting to get the tube well below the smaller fish and in front of the “mommas” hanging out below. Using this technique, I have often been rewarded with fish significantly larger than those breaching the surface. But, in skinny water there isn’t any “beneath” so I continued to fish the school until they had enough surface feeding and all went quiet.

The water level had dropped to about 4 feet, and while I could see shadows darting in the water, plugs and soft baits were no longer working. The fish were now making me feel like a novice. They were still there, but after casting every lure in my bag, I chalked the inaction up to the tide change…or the sun angle…or whatever else that made me feel like it wasn’t me, it was the fish.

Out of desperation, I decided to pull out the tube-and-worm rig. I let out about 60 feet of line, and within moments, I heard a tremendous splash behind me. My line started racing off my reel, and my kayak did a quick 180-degree turn under the power of the fleeing fish. As the fish drew near, it saw my kayak and turned, taking me on an oh-so-fantastic sleigh ride.

Since I could keep the fish within 15 feet in front of me, I had the rare opportunity to watch it as it powered through the water, pulling my kayak forward with each tremendous tail thrust. As it finally tired, I grabbed the tube and pulled the 35-pound striper out of the water and across my lap. I sat there, stunned and confused.

The facts for me to ponder: First, this strike occurred a good hour after all the fish had “gone under” for the day. Second, all morning I had not seen any fish close to that size. Third, the keepers I did see were hugging the bottom and seemed completely disinterested in whatever I had to offer.

Plus, I was trolling in only 4 feet of water. I even had a banana in the boat. How could this happen? Well, that day, over five years ago, changed the way I fish shallow water. While I still enjoy casting soft baits and other lures, I now know that when the fish end the topwater dance for the day and many fishermen pack up is when big action begins and is precisely the time to pull out the tube.

Since that day, I’ve spent hundreds of hours trolling in skinny water, perfecting the technique of shallow-water tubing. While I have a few tips that may help increase your odds of landing a cow, the most important tip I can give any kayaker is that no water is too shallow to try a tube.

I have caught many 30-plus-pounders trolling in as little as 3 feet of water. When talking to fly guys or cast-only guys, the typical reaction to trolling is that it is barely fishing. I hope the following tips will show you that the technique involved in placing a tube correctly is challenging, just like any other type of striper fishing.

And, after sharing space with many other kayakers and fly-fishermen—and often out-catching them—I’m confident that adding the tube-and-worm to your skinny-water fishing repertoire will be a game changer for you. So, the next time you are in shallow water, try these tips and you might not only find that your catching time is significantly increased, but so is the size of the fish.

By using braided line instead of leadcore, an unweighted tube will run close to the surface even with a decent amount of line out. At an average kayak pace, I have found that depending on the current, I can let out 65 to 100 feet of line and still stay off the bottom in 3 to 4 feet of water. If you don’t feel your tube bumping the bottom, it isn’t on the bottom, so don’t be shy about letting out the line. 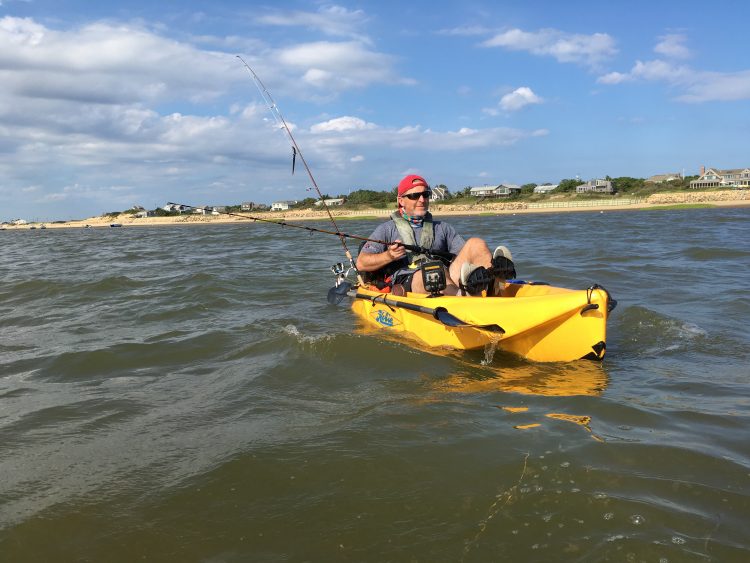 There are many anglers who think the worm on the tube-and-worm is just for stink, so they don’t think much about how they bait up. I insert the point of the hook through the mouth of the worm and thread it over the hook, making certain that none of the hook is showing. I have tried other methods that leave the hook exposed, and the results are not even comparable.

When letting out the line, try not to lose contact with the tube because a piece of weed from the bottom can latch on during a slack moment and blow the entire troll. This is easy to do with a Hobie kayak, because it is hands free, but it’s a little more difficult for the paddle kayaker. Get a good feel for what your clean tube feels like so that when you check the line with a small pull, you can tell if it’s clean. 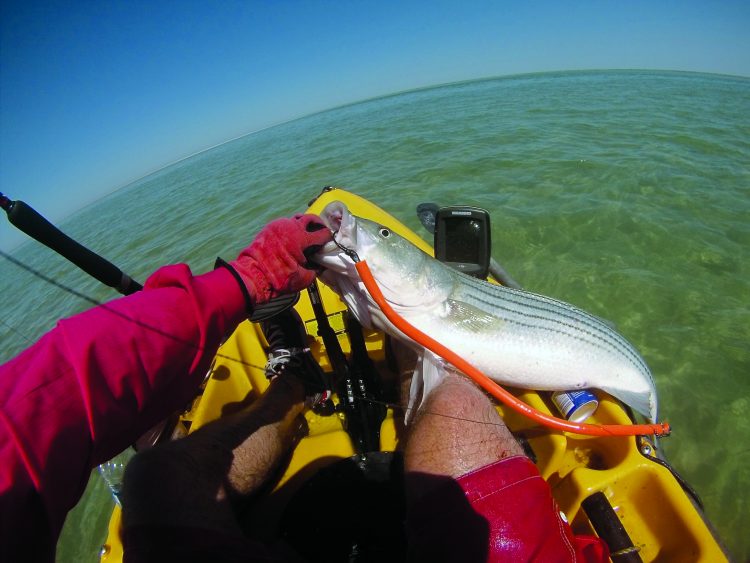